Most students struggle in AA many times and then get passed after many attempts. This article is all about a personal experience of an ACCA student who passed AA in his third attempt. According to him sharing his personal experience regarding AA is like helping others to get passed ACCA paper AA Audit and Assurance paper in the first attempt.  So here below is his story of three attempts. Tips to Pass ACCA F8 Audit and Assurance in First Attempt.

In the first attempt, I attended regular classes of AA. I used bpp textbook and kit and also did some past papers too. My preparation was well and I was like I will get passed easily. In the exam, I attempted 94% paper and I thought my paper is passed because I wrote a lot and tried to copy textbook lines on the answer sheet. In my mind, it was that I attempted majority of the paper so my passing margin is high. Overall knowledge wise I was also good because I followed the book in exam particularly. So, I was confident that I will get passed in the first attempt. But finally, the result comes and I got 49 marks can you imagine I was failed in f8 on 49 %. I was upset by seeing my result and started abusing ACCA and examiners. It was demotivating for me because one more mark and I was passed in audit paper. But there was no other solution to my frustration that I should re-appear in AA exam to pass it. 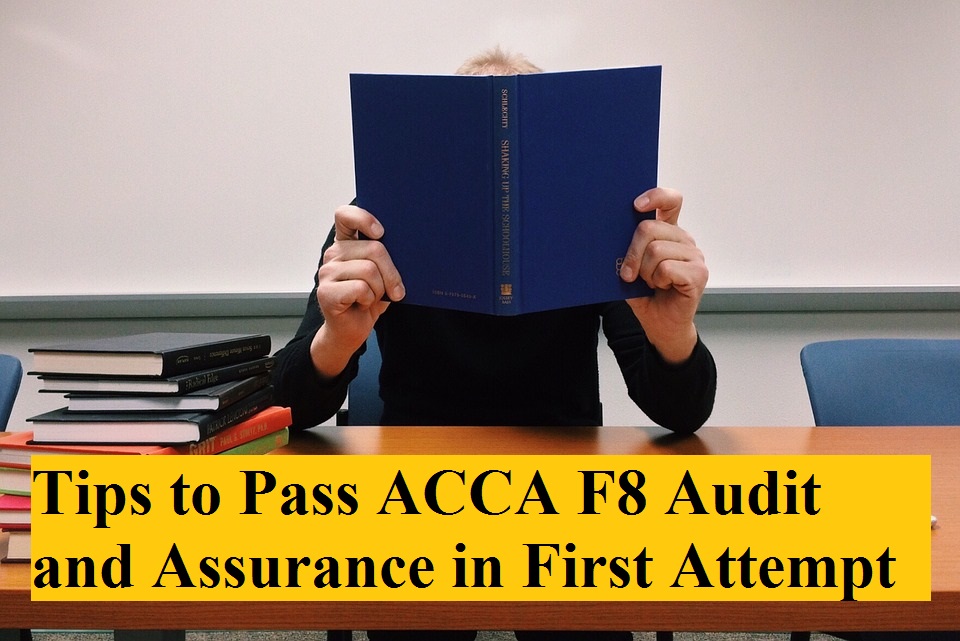 With demotivated heart and energies I started preparing AA again. In the second attempt, I was not taking classes again because I was hiding from my friends in college. This time I also used bpp book and bpp kit. My preparation was good enough to pass the audit paper this time also. I attempted 85% this time. Due to bad time management this time my safety margin was 35% only. So that,s why I was not sure that I will get passed this time or failed.
But again result comes, I got 48 marks and I was failed in AA on 48%. I was totally upset. I was confused how to pass AA paper!

In the third attempt, I reviewed my study plan . I was failing my paper again and again. Now one thing was in my mind that there is something wrong with my preparations or study plan not with the ACCA AA examiner. So first of all, I accepted I am wrong somewhere and changed my mindset in favor of examiner that he is right and I am wrong. In the third attempt I did some additional things also which are given below :
1-Used Bpp book/kit, because I love Bpp contents due to detailed coverage of my studies and clear explanatory language used by publishers.
2-This time I did write the practice of some past papers to overcome time management problem.Because due to bad time management I was unable to attempt 100% paper and it also contributed towards my failure.
3- Interesting thing here is that before attempting this paper I joined audit firm too. I availed this opportunity via my friend’s reference. Joining the audit firm changed my mind towards attempting the audit paper in the exam. This time I attempted my paper with an auditor mind, not as a student who is just writing bookish knowledge on the answer sheet. As an auditor mind means auditing something using genuine procedures, judgments, evidence like a practicing auditor and forming conclusions using knowledge built during his auditing assignment.
4-One thing was in my mind that I will attempt paper with accuracy this time not just copy pasting my bookish knowledge on the answer sheet. So, I wrote to the point and concise this time in the exam.
5-I read technical articles published on the ACCA website. There was 15% of paper from those technical articles. It means reading technical articles for every paper is vital and has a worth on paper.

6-I made a list of 50 plus words from the textbook which were commonly used in exam answers and learned their proper use.

So guys, applying above mentioned areas in my exam I got passed my AA paper in the third attempt at a score of 72 %. Finally, I was free from AA paper for the rest of my life I felt like this after passing it. But one thing again I missed in my exam and that was good time management to attempt 100% paper. I attempted almost 90% paper but got 72% marks. Tips to Pass ACCA F8 Audit and Assurance in First Attempt.